A couple of weeks ago I had some junk mail through the door.  Normally it goes straight in the bin, but one of the cards stood out for me.  It was for Abel & Cole, a company who deliver fresh organic fruit and veg to your door weekly.  The idea of this intrigued me, so off I went to their website.  In looking at the options, I decided to give the medium fruit box a go.

Last Monday was my first delivery and in the box I found apples, bananas, kiwi fruit, pears and a coconut!!  A coconut!!  What on earth am I going to do with that!  I have never bought a fresh coconut before and did have to google to find out how to even open it!

After asking hubby what we should do with it, he suggested making a coconut cake.  I'm happy with that.  I mean, what else am I going to do.  So off to google I go again.  Do you have any idea how hard it is to find a recipe for fresh coconut?  Most of the recipes I found asked for dessicated coconut.  Eventually, I found this one by Delia Smith.  Finally, a recipe for a coconut cake using a fresh coconut.

I did have to wait until after the weekly shop so that I could pick up some of the stuff I don't have in my cupboards and yesterday I took to the task of opening up the coconut.  Using a metal skewer, I made holes in the 'eyes' of the coconut and drained it of its water.  I then placed it in a couple of sandwich bags, put it on the floor and battered the life out of it with a rolling pin!!  It worked and I then got the flesh of the coconut away from the shell using a blunt knife.  Using my vegetable peeler, I peeled away the inner skin and grated up the flesh.  It was at this point that I wished I have a rotary grater!  By the time I'd managed to do all of this, it was time to get the monsters from nursery and crèche, so the cake making would have to wait another day. 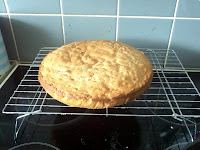 Today, after dropping the monsters off, I got straight to work.  I mixed up my batter as per the recipe and then discovered that one of my 8" cake tins have gone missing!  I ended up using an 10" tin that I have and just made the one cake.  When it came out of the oven it did look a bit flatter than what I would have liked, so I decided that I wouldn't be able to cut it into layers and just frost the top of it.

So, once it cooled, I got on with the frosting.  I halved the quantities of the recipe figuring that I wouldn't need all of that if I didn't have layers.  I was right in thinking that as I still ended up with more than what I needed!  I then got on with frosting the top of the cake and smothering it with the left over grated coconut.  I am really please with how it turned out and it tastes great.  I have now discovered that Aled doesn't like coconut or the frosting, so all the more for me. :-) 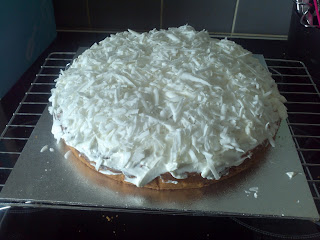