Today is my middle sons 4th birthday and in honour of the birthday boy I thought I would do a post about his birth story.

Due to PJ being born by c/section I had planned to have a selective c/section with Aled.  This was booked in for the 13th May, but as usual, Aled was too impatient to wait.  At about 2am of the 10th I woke up with what felt like period pains.  By 3am I realised that this wasn't Braxton Hicks, but in fact the real thing.  I woke up hubby (who had fallen asleep on the sofa) and told him.  We timed the contractions and they were about 5-6 mins apart.  I called my mum to come over and look after PJ.  She decided to take her time and waited until my sister had finished work at a nightclub and brought her over to babysit so mum could take us to the hospital.  It was about 5am before we finally set off for the hospital.  When I got to the hospital they checked me over and confirmed that yes, I was in labour, but I was only about 3cms dilated.  I was told that I could either go home or stay there.  We decided to stay there and was taken into the labour ward.  I told the midwives that I was booked in for a c/section in a few days and I was told that I could continue with the labour naturally or if I really wanted to, then they could bring the c/s forward.  I decided to see how things go naturally.

By 9am the labour still hadn't progressed, so the consultant decided that they were going to break my waters.  I had already asked for an epidural, so they gave me that at this point.  They came back a little while later and broke my waters.  Literally, within minutes of breaking my waters, labour progressed and lets just say, I was glad that I had an epidural.

For the whole time that I was in the labour ward I was hooked up to the baby monitor which records the baby's heart rate.  The midwife noticed that every time I had a contraction baby's heartrate dropped, so she called the consultant in so that they could put clips on baby's head to check if he was ok.  In doing this the consultant realised that there was a problem and called another one in for a second opinion.  The second consultant came and announced that I had a prolapsed cord and I was rushed into theatre for an emergency c/section.  To be honest, at this point I really didn't know what was going on as it all happened so fast.  I only really got told later on just how serious it all was.  Apparently my mum had a bit of a freak out about it all!


At this point again I was so glad that I had opted for an epidural, as the alternative would have been to give me a general anaesthetic for the operation.  The surgeons worked quickly to get Aled out and I remember panicking when I didn't hear his heart beating on the monitor.  Neil quickly reassured me that this was because they had got him out and a couple of seconds later I heard his cry.  I felt so relieved and couldn't wait to hold my baby.

Writing about it now, I can't believe that was four years ago!!  Here's the birthday boy today with his new Innotab. :-) 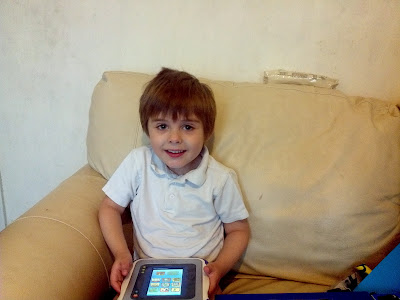