A few weeks ago we were lucky enough to be selected to try out some Walkers Mighty Lights crisps.  I've always enjoyed Walkers over other brands of crisps and these are no different.  With 30% less fat than a standard packet of crisps and only 114 calories in each bag, these are great for someone on a diet as well. 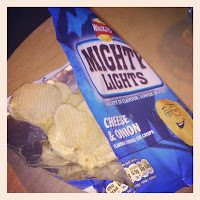 When the package arrived with our crisps, I was pleased to see that we were sent a multipack each of all three flavours, Cheese & Onion, Lightly Salted and Roast Chicken.  I'm not a huge fan of meaty flavoured crisps, so I stuck with the other two flavours.  I was lucky to get a look in though, as hubby was off work with the kids, they decided to dive in before I’d even got home from work!

Whilst the boys did enjoy these, I probably wouldn't put these in the little ones lunchboxes.  They are still very much into the more ‘kiddie’ crisps such as Quavers or Wotsits.  These would be perfect for my teenager or even my lunch though.  The packaging is ideal for any age group, so wouldn't look out of place in any lunchbox.

I found the crisps tasted good.  The Lightly Salted was just that and was not too salty like you can sometimes find with some brands.  The Cheese and Onion were not too strong and didn’t leave a bad aftertaste.  They had a nice crunch to them and I think that is partly to do with the fact that they are crinkle cut crisps.  I don’t know what it is about crinkle cut, but they always seem to taste better than normal crisps and always have a better crunch!  As an on/off dieter, these are perfect to keep in my drawer at work for when I get peckish, without the guilt of all the calories.

In asking hubby what his opinion was on the crisps, he said that they were noticeably less greasy than a standard bag of crisps, but he didn't feel that the fact that they were low fat compromised the taste at all.

I also asked my eldest what he thought and he said that in his opinion, the Lightly Salted tasted a bit like Salt & Vinegar; however, I think that could be more to do with the fact that he’s not that keen on salted flavoured crisps!  When asked if he would be happy to take these as part of his lunch, his answer was a definite yes.

So, I guess the biggest question would be… would I recommend them to other people?  Well, in short yes.  They are perfect for all the family, including the fusspots, they taste good, they are lower in fat than a standard bag of crisps and they aren't too greasy.  Having checked the supermarkets, they are also a decent price as well.

Discloser: This is a sponsored post and we were sent this product to try for free.  This doesn't affect our opinion and all comments are our own.
Posted by Unknown at 21:41 No comments: