Last week I joined in with the Reasons to be Cheerful 1, 2, 3 blog hop and during the last couple of weeks I have also stumbled across the My Week That Was linky.  I thought that these two themes would go perfectly together and (hopefully!!) I am planning on doing this as a weekly post, most probably on a Monday.

So, without further ado, here is 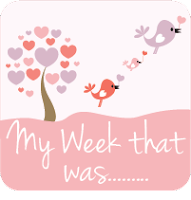 I am going to start from Monday of last week.

Monday started off quite eventful for me.  I thought I was actually going to be running on time for the school run, which is quite an achievement for me most mornings and as we were about to head out of the door I get a phone call from my eldest son's school.  He had managed to injure his arm on the way into school and the schools first aider felt that a trip to the hospital was in order.  So, the morning ended up a rush to get Aled off to school and then a mad dash to the next town along to pick up PJ!  In asking PJ what he has done, it transpires that he was trying to do a front flip and fell onto his elbow.  By the time I've picked him up the swelling has gone done, but just to be on the safe side, I take him off to the hospital.  After waiting for what felt like ages, we get sent off to be x rayed.  We wait around in Childrens A&E for another 1/2 hour or so and finally a nurse comes to call us.  She advises us that the x ray is clear and there is nothing wrong with the arm.  Thank goodness!  The rest of the day was pretty uneventful.  Hubby had come home from work to pick Aled up from nursery, so he gets back off to work when we get home.  What a wasted morning!

I was not as organised Tuesday morning and ended up in the usual rush to get everyone ready in time for the school run.  In trying to find shoes, it appears that one of Noah's shoes has gone walk about.  It is still missing now!!  He ended up walking to the school in Aled's shoes which are a whole size too big!
Tuesday evening I went up to my friends house to get some waxing done.  She runs a Beauty Therapy business from home around her day job.  It was nice to catch up with her, as I hadn't seen her for quite a while.  It was also nice to catch up with all the gossip, as I very rarely see my old friends these days.

Wednesday sees my first quiet morning of the week as Noah goes to crèche on a Wednesday.  We still hadn't found the missing shoe, so he ends up in Aled's shoes again!  Using my free morning, I go and do some shopping.  I also pick up some new shoes for Noah!  When I get back, I have a note through my door from the postman, I have a parcel left with my neighbour.  I was rather excited and confused, I hadn't ordered anything, so what could it be??  It turns out to be a Herman the German Friendship Cake.  A friend from a facebook baking group that I am in sent it to me.  When she posted on the group to say that she was given one of these and needed to pass a portion of the mix on, I was intrigued.  I am on day 7 at the moment and can't wait to see how he turns out!
Wednesday was not all fun and games though.  I had work Wednesday night and on my drive to work, after just coming off the motorway I get a flat tyre!  I was lucky in that I was very close to a petrol station, so very slowly I drive there with my hazards on and pull up by the tyre pump.  I try to pump up the tyre, but nothing was happening.  A very kind gentleman saw me by the road and came over to offer his assistance.  It turns out that he was american and was staying at the hotel across the street.  I thought that this was very sweet of him to help.  Anyway, there wasn't anything he could do, so I call work to let them know the situation.  I was closer to work than I was to home.  My colleague tells me about a product called Tyreweld and advises me that this may help.  In I go to the petrol station and buy it.  I follow the instructions and attach it to my tyre and turn it on.  All I hear is a hissing noise.  On closer inspection it seems that the tyre has completely blown and nothing is going to help!  I also didn't have a spare.  I call back to work and see if they can get anyone out to help me.  Our warehouse guy Aaron comes out to me in the van and he brought with him the spare wheel from his car.  Now, he has a tiny Peugeot 106 and I have a massive Citroen Picasa, so the tyre was too small for the car, but thankfully it managed to get me to work.  After my shift I decided it was best to leave my car there, as I didn't want to risk driving it home with the small wheel.  Aaron very kindly let me borrow his car to get me home.  He normally leaves it at work during the week while he uses the work van.  It was very strange driving such a small car on my way home! lol.

Thursday sees me dropping the boys off to nursery and creche and then going off to source a spare wheel for my car!  I was very lucky and managed to find somewhere that does second hand ones which were not too expensive.  Using Aarons car, I go and pick up the wheel and then head off to my workplace to change the wheel on the car.  Aaron changes the wheel for me and I have a catch-up with my sister who also works there.  I then make my way back to pick up the boys, stopping at the petrol station to make sure my tyre pressures are all correct.  I leave the car and home and walk down to the school.  I go to get Noah first from the crèche (which is next door to the school).  In waiting to get into the building a lady comes up to me and whispers in my ear that my trousers have split at the back and tries to tug my top down over the split.  I was mortified!!  I still had to get Aled from nursery and walk all the way back home!!  This is turning out to be a right old week!  On the plus side, Aled's nursery had a farm visit in on this day, so Aled was very excited about all the animals.  His teacher tells me that he sat on a horse (shetland pony) and also fed the horse.  Aled shows me round all the animals when I pick him up (being very self concious of the split in my trousers) and then asks me if he can take the rabbits home.  Um, no!  I tell him that nanna has rabbits and he can go visit hers instead! lol. 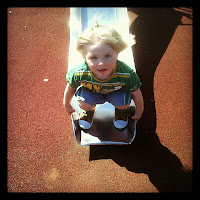 On Friday me and Noah take advantage of the gorgeous weather and go to the park after dropping Aled off at school.  We spend about 20 minutes there when I realise that I had left my phone at home, so we head off back home via the shops.  This ensued a major tantrum from Noah who wanted to stay in the park.  About 1/2 hour before Aled's pick up time, I take Noah back to the park.  In hindsight, maybe that wasn't such idea going from the tantrum that I got when we had to go collect Aled!  In the afternoon we had a meeting about Noah's space for the nursery starting in September.  It was just an informal meeting to fill out some forms and to ask any questions that I may have.  As Aled is currently in the same nursery, I am familiar with how it works there.  It was also confirmed in this meeting that Noah will be attending the morning sessions when he starts, which I am really pleased about.

On Saturday I had work at my other job.  It was a busy one at work, which was to be expected with the hot weather.  I finished work about 4.30 and head off home.  By the time the evening set in, I was starting to get quite a bad headache, so after catching up with 'The Voice' I headed off to bed at about 8.30pm.

Sunday I was at work again.  I finished a bit earlier on Sunday and was home at about 2pm.  I decided to dye my hair in the evening.  I had bought the new Schwarzkopf Shake it Up hair dye when I went shopping earlier on in the week.  I did find it easier to use than normal hair dyes, but as usual when I dye my own hair, I am slightly dissappointed with the results.  I have such dark hair, that I struggle to find a dye that will come out really bright.

Well, there we have My Week That Was.  With the happenings of last week, I had a bit of a struggle trying to think up my Reasons to be Cheerful, but here they are:

So, there we go.  Until next week.
Jackie. x