We decided not to go Trick or Treating this year.  I was working Wednesday night, but also, Noah had a chest infection, so we thought it was best to keep him at home in the warmth.  That doesn't mean that we didn't have some Halloweeny fun though!

As I mentioned in my last post, the boys went to a Halloween party on Saturday and got to dress up then, looking very dapper in their Frankenstein costumes.

Over the weekend I had bought a couple of pumpkins while out doing the weekly shop, so on Monday we decided to carve them out.  During the day, I got Aled to draw a face on a piece of paper, of which he drew about 5 or 6 pumpkin faces (more or less looking the same!).  When daddy got home from work, he then cut the top of the pumpkins and it was our job to gut it.  Aled really got into this and had a great time digging all of the seeds out of the pumpkins.  Noah, on the other hand took one look and refused to help out!

Hubby then took Aled's picture and used it as a template for the bigger of the two pumpkins.  Aled was delighted to see the face he had drawn on the pumpkin.  As Noah had decided not to draw a picture, hubby thought of the idea to put the boys names onto the other pumpkin.  Using a marker pen, he drew out the names and then cut them out, being very careful to not just make a big hole with the rounded letters.  The overall effect was fantastic.

As we are a first floor flat, we put them out on our balcony for everyone to see.

On Wednesday, I decided that it would be fun to make some Halloween cookies.  I had bought some Halloween cutters from Avon and had also received some more in the Cake Decorating magazine that I subscribe to. 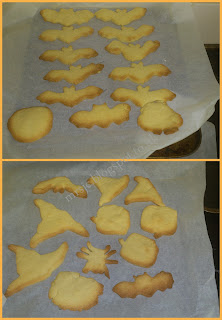 I used a very basic biscuit recipe and weighed out the ingredients for the boys.  With quite a bit some help from me, we made up the dough and then rolled it out.  I let the boys choose and cut out the shapes.  Noah thought it was great and told me it was like playdough! lol.

Noah wanted to try out all of the shapes, however Aled decided that the bat shape was the best.  We were very pleased with the result and they also tasted yummy! 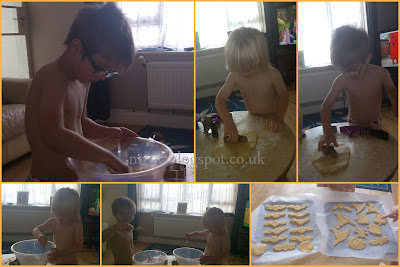 Although we didn't make a huge fuss over Halloween this year, we had our own little bit of fun.  Maybe next year we will do a bit more.