This weekend we had a fantastically spooktacular time.

On Saturday the boys were invited to a Halloween themed fancy dress joint birthday party for my friends daughters.  Not wanting to spend a fortune on a costume for them, my mum made them both a Frankenstein mask using her embroidery machine and I teamed that up with a black top and jeans.  I thought that they made a very cute pair of Frankensteins (but of course I am rather biased).

It was great seeing all the kids dressed up.  Every child got into the spirit of the were all dressed up.

We had a great time at the party.  There was a bouncy castle and other than for a bit of food, the boys didn't want to come off it!  My friend made a bat cake and a goth princess cake for her girls, they both looked amazing! 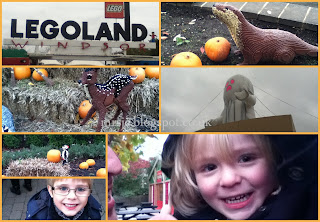 The weekend didn't end there though.  On Sunday we went off to Legoland Windsor to watch the fireworks.  I was working, so I met up with everyone a bit later.  Hubby, my sister and the boys arrived at Legoland about 12.30pm and had no problems with getting into the park.  We were worried that the park might be full, as the fireworks are very popular there, but it wasn't too bad.  The park was suitably decked out with pumpkins and cobwebs everywhere.
We went on a few rides and watched the pirate stunt show and the puppet show at the Duplo Theatre, both of which my boys loved.  At just after 4pm we decided to get something to eat, so headed off to the Pasta & Pizza restaurant for some food.  I do have to say, this did spoil or day a little.  It was quite busy getting into the restaurant.  I'm guessing that alot of people had the same idea as us to get some food before the fireworks.  We found out that the kids eat free offer had ended the week before, but luckily for us, they are still doing the kids eat free after 4pm offer for annual pass holders, which we are.  It would have worked out a very expensive meal without that offer and it wasn't exactly cheap anyway!  The price for an adult all you can eat meal has gone up to £11.95 per person.  We went up to queue for our food and this took about 20 mins to manage to get food!  As we had to take it in turns so that someone stays at the table with the boys, it took a relatively long time for us to all get fed.  It didn't help that other guests were pushing into the queue and there was quite a few stressed looking people! 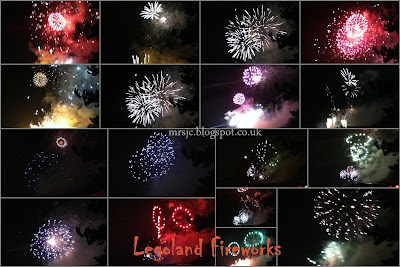 Eventually, we were all fed and watered and we made our way to find a good spot for the fireworks.  We were told by a member of staff that it was extremely busy in Miniland, but there is a viewing point in the Driving School attraction which was much less busier as less people were aware of it.  We decided that we would go in there.  We found a nice spot and waited for the fireworks to start.  Unfortunately, the rain decided to come down then, so we did get rather soaked!  Not long after the fireworks started, Noah fell asleep in hubby's arms.  The day must have worn him out!  Aled thoroughly enjoyed it though.  I was glad that my sister bought the 3D glasses, they really made a spectacular fireworks display look amazing!  The glasses have little pixels in them, which when you look at a bright light they give the impression of lego bricks.  Looking at the fireworks with the glasses made it look like hundreds of lego bricks falling from the sky.  It really was fantastic!  PJ took some fab photo's using his iPod.

We had originally planned on staying after the fireworks for a little while, until most of the traffic had left, but as Noah had fallen asleep we decided it was best to try to get him back home to bed as soon as possible.  We made our way back to the top of the park, along with the rest of the crowd and into our cars.  I was very impressed with how easy it was to get out of the park.  It took me 10 mins to get from the car park barrier at the top to the bottom of the hill.  The car park team had installed temporary traffic lights on the roundabout, which made exiting the park the easiest I have ever found it.

All in all, we had a fantastic weekend, although Noah has now got a chest infection, which I think may be a result of being out in the cold and the rain.  I'm hoping that it doesn't spoil our half term!