Hats on for the sun

Can you believe it, summer is finally here!  Yay. (although if BBC weather is anything to go by, it's not for long, boo).

Of course, for days out in this weather there are a few things that are essential for the little ones.  Sun cream for one and of course a hat!  I have been dying to attempt to make a bucket hat for my boys, so with the sun coming out and a trip to the park for a picnic with some friends meant that I needed to do it sooner rather than later.

Using the Oliver + S bucket hat pattern and tutorial, I made a start to them.  My mum had bought be some fab racing cars fabric and black & white gingham for the inside.  Due to evening commitments this week, I did have to make the hats during the day, with the two little monsters around.  Not something I will be in a rush to do again!!

Tuesday I spent the morning cutting out the fabric for both hats and then after lunch I got the sewing machine out for the sewing.  The number of times I had to say 'Don't touch', 'stop that', 'please leave that alone' was enough to drive anyone insane!

I did really well following the instructions until it got to the last stage.  Attaching the two hats together.  With this pattern, you attach the crown and sides of both fabric A (the outside) and fabric B (the inside).  Then you sew the brim of both fabrics together and attach that to the made up top of fabric A.  What the pattern then tells you to do is hand sew fabric B to the rest of the hat, using blind stiches and then top sew over the seam to reinforce it.

Of course, to me, firstly hand sewing is too much of a hassle and secondly, I haven't a clue how to blind stitch!  I thought that I would be clever and use the sewing machine for this part.  Unfortunately, when I turned the hat back around, the stitches were a bit all over the place!

For hat number two, I decided that it would be easier and tidier if I don't try to make the hat reversible.  This time I made up the sides and crown of both fabrics and attached the brim to both sides together.  The top of the hats wrong sides together and attached the brim as the tutorial shows for attaching to fabric A.  This does then have a seam on show on the inside of the hat, but the outside looks perfect.  I was really happy with the result of this hat. 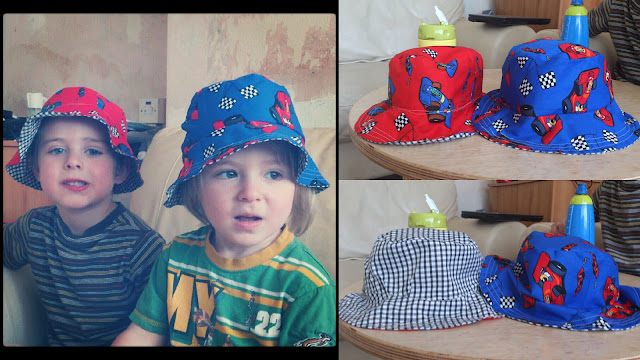 In showing off my hats to a sewing group on Facebook, I have now been given a link to this tutorial for a bucket hat, which is a different way of making a bucket hat reversible, so I may have to get some more fabric to give that a go.  After all, a boy can't have too many hats can he?!