Well, here it is, the end of term.  Yesterday was both Aled & Noah's last days at nursery and creche.  PJ still has a half day today to go, but this afternoon that is it! 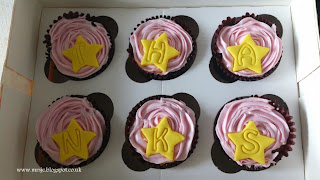 As a thank you to Aled's teacher for all of the support she has given both Aled & myself, I baked her some cupcakes and decorated them with royal icing stars embossed with the word Thanks on them. (Don't you just love the Cake Decorating magazine!).  I also printed off a Thank You Teacher card from Activity Village  in which I got Aled to write his name and draw a picture.  I watched while Aled gave her the gift and she looked really chuffed to get them.

Yesterday morning was also Aled's parent/teacher meeting.  It went really well and I was pleased with the outcome.  We discussed Aled's development throughout the last year and his teacher has highlighted the areas in which she feels that Aled is still struggling with, which is mainly his social skills and speech.  She advised me that although Aled is more tolerable of children playing along side him now, he still does not play with other children and is still prone to having a screaming fit when another child tries to play with the same toys as him. She also advised that Aled has struggled this week in school as, being the last week of term, they haven't run to their usual daily routine, which Aled found difficult to deal with.  I have written down all that we have discussed ready to pass on to the Child Development Centre when we eventually get his follow up appointment through.  As expected from the NHS, we are now past the six months since we last saw them and I am having to chase up an appointment.  All in all though, I was pleased with the meeting and will really miss having her as Aled's teacher.  I also briefly spoke with the Head of Early Years, who assured me that they will keep a close eye on Aled when he moves up to Reception and if he shows signs of struggling in full time education, then they will work with me to help him to adapt to the new school routine.  She also advised that the schools SENCO will still be working with Aled when he moves up to Reception.

So now, we have six whole weeks for me to try to keep 3 kids entertained!  On one hand I am looking forward to not having to rush around in the mornings and being able to do what we like, but on the other, I am dreading the constant fighting and tantrums that my boys tend to have!  At least the sun is finally starting to come out and fingers crossed it is here to stay!