Can you believe that this is the last week of term!  How quickly has the year gone since my Aled started nursery!

He has grown so much in this last year and has come so far.  Back in September last year he had very little social skills and his speech was not quite there either.  Now, even though he is still slightly behind the others in his class, his speech is so much better.  You can understand most of what he says and his social skills have come along loads as well, although he does still prefer to play by himself to playing with other children.

There are still some areas for concern and I am awaiting an appointment from the child development centre for his follow on appointment, but he is a totally different boy from this time last year.

Last Wednesday was his graduation ceremony at Nursery.  It was the cutest thing ever and I managed not to cry through it! lol.  The different groups all took it in turns to come up and sing a song and then they were presented with their graduation certificates.  At the beginning while the Head of Early Years was making her speech Aled spotted me in the crowd, pointed at me and shouted on the top of his voice 'THAT'S MY MUMMY!'.  I think the whole crowd turned and looked at me. lol. 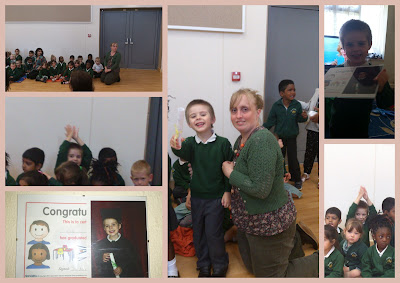 I think Aled is looking forward to going up to Reception in September and I am looking forward to him going full time, but I'm not sure quite how he is going to take to the change of teacher and classroom.  I hope he takes to it smoothly, but he is quite attached to his current teacher.

September also sees Noah starting nursery, so I will have all 5 mornings with myself.  I won't know what to do with myself having all that time child free!  Noah is a much more confident child to what Aled was last year and from his time in crèche I know that he will take to nursery like a duck to water.  I really hope he gets as much out of nursery as Aled does.

But before all of that, we still have the 6 weeks holidays to go.  I do hope that the sun does remember that it is supposed to be a SUMMER holiday and we get some nice weather so that we can take advantage of our Merlin Passes during the holidays.