I bet you'd all forgotten about me, it's been so long!!

Those who follow me on Facebook and Twitter have most likely seen my posts to say that I have now moved flat.  We finally, after 3 years of waiting, have been given a three bedroom flat.  And yesterday, after waiting two weeks, we finally have our internet installed, yay!

It was all very last minute and rushed.  On the 11th September I got a phone call from the local council asking me if I would like to view a property the following day.  After waiting on the list for a bigger place for three years I jumped at the chance.  I was told that it was a multiple viewing, so there would be others from the waiting list viewing the flat at the same time.  So, the next day, myself and Noah went over to the flat.  It was only the next street over from where we were, so we walked over.  There were another family there also to view it.  The flat was very similar to what I already had except it has an extra bedroom.  Perfect for us.  I asked the lady from the council where we were on the list and she informed me that we were in 4th place for this particular property.  Knowing how hard it is to get a place in our area, my heart sank and assumed we wouldn't get it, but I put our names down as interested.

The next day I got a phone call saying that families 1 and 2 had turned the property down, but family number 3 had accepted it.  This wasn't a huge surprise to me and I had already accepted the fact that we wouldn't get it.

The following Monday (17th Sept) at 11.30am I got a phone call from the lady at the council telling me that family number 3's application didn't go through and am I still interested!  Hell yes!  She then advised me that she had to do a property inspection of my current flat and the application form.  Can she come out this afternoon!  Eek, panic stations.  The appointment was made for 1.30pm, leaving me 2 hours to tidy up my flat that had looked like a bomb had hit it!!  Thankfully my mum took pity on me and came over to help.  We managed to get the flat into a fairly presentable state just in time.   The lady came over and the first thing she noticed was the damp problem.  I told her that we have had this for a number of years and have been fobbed off by their repairs company every time I called them.

Eventually she finished the inspection and passed us for transfer.  She did state that we had to remove everything from the flat, including the flooring etc.  She went through our documents and said that my housing officer needed to sign it off, but we will most likely be signing the new tenancy agreement and get the keys by the end of the week.  Oh my word!! From no flat to getting the keys in the space of a few days!

I got the phone call the next day (Tuesday) to say that my housing officer has signed off the application and that the only appointment he had was the next day.  As we had to pay 2 weeks rent in advance and I didn't get paid until the Thursday, I said that this wasn't possible.  The next available appointment was the following Monday.  I took the Monday appointment, but after speaking with hubby, I remembered that we had a cheque book that we could use for the rent, as the cheque wouldn't get cashed until after payday.  With this in mind, I called the lady back and made the appointment for the Wednesday. 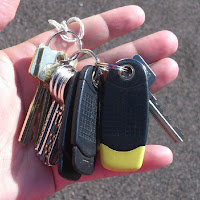 The following day, I met hubby outside of the council offices and we went in to sign our new tenancy!!  We had the keys, we actually have a three bedroom flat!!  Up until that moment, I never really thought it was actually going to happen.  We were lucky in that by signing the documents on a Wednesday, the council only start new tenancies on a Monday, so we effectively had 5 days rent free to get all of our stuff moved over.

Due to hubby working all week and myself working nights, we only really had the weekend to move, but between us we managed to get a few things over to the new place during the course of the week and hubby got the flooring down in the living room before the weekend.  My sister was also kind enough to spend her Friday painting the boys room, so that it was dried and ready for them to move in there.

With the help of my mum, sisters and brother-in-law, we managed to get the majority of everything over on the Saturday, including all the big items.  (By hand I might add, as we didn't have a van!)  Sunday was spent getting the rest of the small stuff over and clearing out the old flat.  After 6 car trips to the tip and alot of to-ing and fro-ing, by 7pm the Sunday evening we had moved!

After two weeks in the new place, we are all pretty much settled in.  The new neighbours are all lovely.  PJ is happy to have his own bedroom and the little ones love their new room.  We do still have some unpacking and a little bit of decorating  to do, but to be honest, I'm in no rush now that the bulk of it has been done!

I now have alot of blog posts to catch up on now that we have the internet back on (over 200 posts are waiting for me over on blogloving, you guys can certainly write alot in two weeks!! lol), but you will hear from me soon.