Today my littlest boy turns 3.  I can't believe how fast the time has gone!  In just over a weeks time he will be donning a school uniform and starting nursery!

Noah has always been the laid back baby.  Where Aled was always quite highly strung and needed plenty of attention, Noah was the complete opposite.

Noah was born by elective c/section.  After having two c/sections and with the fact that Aled's was an emergency, there was no way that the consultant was going to let me have a natural birth.

I found myself more nervous the morning of this c/section than what I was for either of the other two boys, but everything went smoothly and he was in my arms in no time.  At 8lbs2oz, he was also my biggest baby!

On the whole, Noah was a happy baby.  Even though he suffered from dreadful eczema from about 5-6 months old right up until just after he turned two, he always had a smile.  Most of his first year was spent on anti-biotics from the infections caused by his eczema, but this still didn't get him down.  From about six months old onwards, Scratchsleeves and sleepsuits with build in mitts were our best friend!  He is still prone to getting a flare up every now and again, but nothing like he used to. 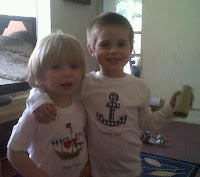 As he's gotten older, Noah and Aled's relationship has blossomed as brothers.  There is the usual fighting (on an hourly basis) over toys, but you can already tell just how close those two are going to be when they are older.

He's a cheeky little monkey, but we wouldn't have him any other way. :-)

Here is a little montage of my baby from birth to 3.  I hope you enjoy!

Email ThisBlogThis!Share to TwitterShare to FacebookShare to Pinterest
Labels: birthday