On Friday we celebrated my middle son's 5th birthday.  It's mad to think that it's been 5 whole years since he barged his way into the world 5 days before my planned c/section date!  Creating drama from the start with a prolapsed cord and being rushed into theatre for an emergency c/section, sometimes it feels like I haven't stopped with him.  Still, I wouldn't have him any other way! 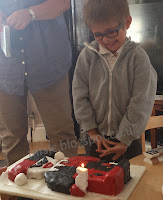 On Friday my mum and sisters came round and we had a bit of a family tea party.  We bought Aled some games to go with the second hand Nintendo DS that my mother gave him.  We thought it would be funny to give him the games before the DS.  Along with the DS, my mum also gave Aled a little case to keep his games in and an embroidered t-shirt.  My sister Susan gave him a t-shirt she brought back from South Africa and my sister Helen gave him a Lego Darth Vader torch.

After some snacks, we brought out the cake.  Aled is really into the Lego Batman game at the moment, so I baked a rectangular and a round cake and hubby shaped and decorated it to look like the character Harley Quinn from the game.  Judging from Aled's face, I think hubby did a good job!!

Yesterday we had a birthday party with some of Aled's friends.  As the boys are huge fans of Lego and of Legoland, we decided to hold the party at the Legoland Hotel.  On booking, I checked what was included in the price and although at first glance, it appears quite pricey, I was surprised at just how much you get for your money.  We got 2 hours in the hotel restaurant, table decorations, a buffet for the children, party bags and the cake!  When you think about adding that all up for a standard party in a hall, you would be looking at roughly the same cost, so I thought this was fantastic value.

Having already been pleased with my choice of booking the party here, I didn't expect to be completely bowled over with what we received!!  We got up to the restaurant and was shown to our own cornered off section of the restaurant.  One of the most child friendly things that the restaurant has (other than the play area in the middle of it) is the tablecloths.  They are like a giant colouring in sheet and with crayons on the table, the kids got stuck in!

We then let the kids head off into the play area.  They all had a great time running around and with Xbox's set up with Lego games, the boys were in their element!  Our host was always around making sure that we were happy with everything and even offered teas and coffees for the adults.  So often at children's parties the parents are forgotten, so this was a really nice touch.

When I gave the nod, the food was brought out.  I have been to parties at soft play centres before and have never been that impressed with the spread, but this one was fantastic.  There was plenty there to eat for not just the kids, but also for the adults as well.  I had booked for 12 children but only 9 turned up, but even with 9 kids and 6 adults there was still loads left over!

After the kids had finished, we let them go back to play.  Hubby took some of them to the outside play area and they had a great time running around out there.  Before we knew it, it was time for the cake.  Our host came out with about 5 other members of staff and we all sung happy birthday to Aled.  The cake not only looked fantastic, but I can confirm that it also tasted wonderful as well!

The cake was then taken off to be cut up for the party bags, which were also provided as part of the package.  Inside the party bags, we had a Lego mini-figure and Legoland pencil, notebook and rubber.  We did add to it a little by putting in a bag of Haribo and box of raisins.

I would like to say a huge thank you to Legoland for making my son's party such a fantastic one!  I would recommend them completely to anyone considering where to have a birthday party in the local area.