Last weekend we took advantage of the long weekend and headed off home to Wales to spend some time with the in-laws.

As hubby was working late on Friday, we set off Saturday morning.  We had a pretty good journey there and made it down in good time.  The first thing that has changed since we last went was that they now take card at the toll bridge!  Whilst not a huge thing, for us it means no more making sure we have cash on us before setting off!  As I tend to use card for most purchases, this is one little hassle that I no longer have to worry about!  It's just a shame I didn't know that last weekend! lol. 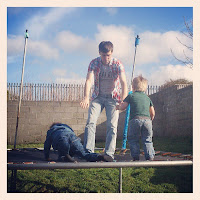 We spent most of Saturday in my sister-in-laws garden enjoying the sunshine while the boys used up their energy on the trampoline.  As we don't have a garden, they loved it!  Saturday night we headed off to a friends for dinner and drinks while my niece babysat the boys.

Hubby headed off back to the boys just before midnight, while me, my sister-in-law and friend stayed up chatting until nearly 4am!!

On Sunday we headed off in search of a cafe for a hangover breakfast.  My sister-in-law tells us about a great cafe and we head off towards the Mumbles.  As we get closer, hubby asks where the cafe is, to which sister-in-law tells us it's nowhere near where we are!! It turns out she thought we were heading down to the pier, then going for breakfast afterwards!  As we promised the boys some food by the beach, we 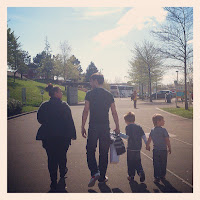 decide to head off down to Swansea Marina instead.  We find a fab little cafe and had some food.  The kids meal included an ice cream, to which I was pleasantly surprised to find out it was homemade!  We spent the rest of the afternoon mooching around the Swansea Waterfront Museum.  While the boys were bored fairly quickly, I could have spent hours in there.  They have a twitter quiz in which you get tweeted questions and have to find the answers in the museum.  I love this bit of interactivity at the museum and would love to go back.

On Monday we headed off for a short walk alongside the beach and then to the LC2 for an afternoon of swimming.  As hubby had forgotten to pack his swimming trunks, he headed off to the town centre to find a birthday pressie for Aled.  This was the first time that I've ever really taken the boys swimming, so I was a bit nervous as to how they would be.  Aled was straight in and loved it, but Noah was a little bit nervous of the pool.  Once he was wet and in the pool though, Noah loved it and was soon running around and going down the kiddie slide.

All to soon though, it was time to go home.  We had a lovely, fairly relaxed bank holiday weekend and even had some great weather to go with it!