A week last Sunday we decided to take the boys into London and visit the Natural History Museum.  The boys are dinosaur mad and one of hubby's colleagues had told him all about the dinosaur section of the museum.  As we were going into London anyway and having Merlin Annual Passes, I really wanted to visit the Sealife Centre as well.  So, off we went with the boys being told that we are going to see some dinosaurs at the museum and to find Nemo and sharks at the Sealife centre.

One of my worries was how the boys would be on the train and tube.  I am very nervous around the tube and the last time I went into London with my mum and sisters I had a mild panic attack while on the tube.  I needn't of worried though, the boys absolutely loved it and enjoyed the adventure.  They were hopping on and off the escalators with no fear at all!

After a bit of checking on our phones as to which station we needed (for Scout leaders hubby and I aren't very good at advance planning!! lol), off we go.  We went to the Natural History Museum first and after getting off at South Kensington station, we realised that there were two entrances to the museum.  We went to the first one that we could see off Exhibition Road. 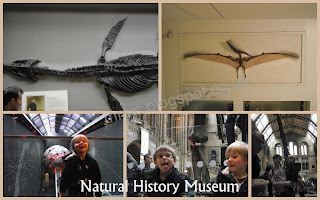 Still, we had a good morning.  The little ones didn't really get most of what the displays were about as we worked our way through the Red and Green Zones, but they enjoyed pressing buttons on the interactive displays.  I found the fossils fascinating, but didn't get much of a chance to fully explore.  The boys all went off to the Creepy Crawly area and I got the chance to rest my feet a little.  By the time we'd reached the central hall, the boys were getting a little bored.  They loved the Diplodocus skeleton there.  It was at this point that we realised that we had used the wrong entrance for the dinosaur display.  As there was a queue waiting to go in and the boys were getting a little restless, we decided to leave it for another day. 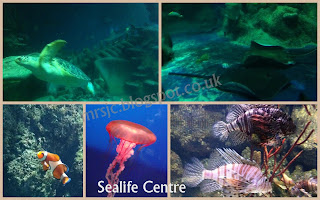 After a search for the nearest Maccy D's, we set off to the Sealife Centre.  As annual pass members, we bypassed the ticket desks and went straight into the Sealife Centre.  The downside to this was that we didn't get a visitors map, so were going round a little blindly.  The first thing that we came to was a glass flooring where you walk over the aquarium.  You then come to a lift, where you go down two floors and work your way back up.  I absolutely love aquariums and could spend hours there.  The boys however, had a more direct attitude, especially Aled.  Once he had seen something, he was ready to move on.  Quite often I found myself left behind as hubby and the boys had moved on to the next display without me!

My favourite tanks were the rays and sharks.  There is something about them that is so fascinating.  Seeing the giant turtle swimming around with sharks and rays was amazing!  The walkthough tunnel was also fantastic, but a little too short and crowded.

All in all, a great day was had.  The boys behaved relatively well and I think even PJ had a good day!