Hello there.  I'm a bit late again this week.  With the bank holidays and half term it's been a bit manic round here.

I am going to start with my Reason's to Be Cheerful this week.

This week it's an easy one.  With the double bank holiday, Jubilee fun and half term, I am really enjoying this week.  Monday and Tuesday I have enjoyed the lazy mornings, yesterday we went to Legoland, today we are having a pj day and tomorrow we are off to Chessington World of Adventures.  The only thing that could make this week better would be nicer weather, but we are not going to let the weather spoil our fun! :-)

Also I am really proud of my eldest son.  We got a letter from the interim headteacher at his school last week, congratulating him on his dance skills.  PJ is in a dance troop at school, which he and his friends set up.  They have one of the teachers helping them to organise and take part in various school/multi school activities as a troop and it was nice for the headteacher to take the time to write to us, I thought that was a really nice touch. 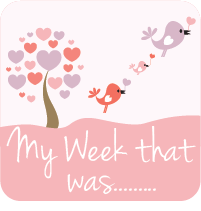 Monday was pay day for me, don't you just love pay day!  Naturally we had to have a take-away for tea!  The day was not all sweetness and light though!  After Aled came home from school I noticed him scratching his head.  On inspection he had head lice, yuk!  This was something I hadn't had to deal with for about 10 years as PJ always had very short hair so never caught them.  So a trip to the chemist and almost £13 lighter I get a bottle of head lice treatment.  They had to keep it in for 8 hours, so overnight was the best option for us.  That afternoon Noah decided to have a nap.  Sometimes he may fall asleep for an hour or so towards the end of the day, but on Monday he fell asleep right after lunch!  He stayed asleep until about 5pm, so a very long nap for him.  This then resulting in a very long night for me!  He refused to go to sleep until about 9pm, which as bedtime is normally 7pm, it felt very long!

Tuesday was just a day full of bad moods and tantrums.  I think the late night really got to Noah and nothing I did was right.

Wednesday is crèche day for Noah and I had a lovely morning.  I had lots planned, but I ended up relaxing on the sofa for nearly the whole 2 & 1/2 hours catching up with Desperate Housewives and my soaps!  After picking the boys up from crèche and school, Noah fell asleep before lunch time.  I hope this isn't going to be a regular thing for him!  Wednesday evening I had work.  It wasn't too busy, so was ok.

On Thursday after dropping the boys off to crèche and school, I went up to visit a friend of mine.  The main reason for the visit was to drop off one of my Herman the German Friendship cake babies (post to follow soon), but it was nice just to catch up.  We hadn't had a good natter for a long while, so it was really nice to have that chance.  I really must make it my aim to keep in touch with my friends more often.  That evening I went to a Quiz Night, organised by the social team of my weekend job and it took place at work.  I was a part of team of 4 girls.  When we found out the names of the rounds, we didn't think we would do very well with the 'Star Wars' round and the 'Sports' round, but we surprised ourselves with our knowledge.  Although we weren't the winners, I have been told that we did come in the top ten of all of the teams.  I had a blast, I do love a good quiz night and it was nice to get out and socialise with my colleagues.

At 2am on Friday morning we were awoken with Noah having a screaming fit.  I went in to get him, but he stood in his doorway shouting for daddy.  If I went near him he screamed even louder, so hubby had to go out to him.  We brought Noah into our bed, but he freaked if I so much as looked at him.  All we could think of is that he must have had some sort of nightmare.  It took us about 45 mins-1 hour to settle him, but even then it was in our bed, so me and hubby didn't get much sleep that night!  As you can imagine, I had a very grumpy Noah on my hands on Friday!  After dropping Aled off at school I needed to go and do a bit of shopping.  I ended up pushing a screaming Noah all round Tesco's.  No matter what it was, it wasn't right for him and the morning ended up very exhausting.  Funnily enough, Noah didn't nap on Friday, even though he was knackered the whole day!  Friday was also my day 10 of Herman, so I added the last of the ingredients and baked him up.  He was yummy!  That night Neil and PJ were home from scouts, so I ended up having an early night with my book.

On Saturday I was at work in my weekend job.  It was fairly busy, so the morning went quite quickly.  I finished about 1pm and when I got home I had a bit of an afternoon nap.  We watched the final of 'The Voice' in the evening and I had another early night with my book.  I am reading Heidi at the moment, as after doing a post not so long ago about my favourite childhood book I wanted to read it again.  I was pleased to find that the Kindle version of it is free, so I downloaded it.

Sunday I was at work again.  This time when I got home hubby went for an afternoon nap, so me and the boys watched the last hour or so of the Queens Diamond Jubilee Thames Pageant.  I have to say, I do love our Queen and ended up quite caught up with the whole Diamond Jubilee goings on.  The boys really enjoyed watching the boats going down the Thames as well.

Well, there we go, that is my week that was.  Until next week.