A couple of weeks ago a facebook friend posted in a baking group that I am part of if anyone would be interested in taking on a Herman cake.  I saw the words cake and was intrigued.  She went on to explain that Herman is a sour dough batter that you have to look after for ten days and feed him every so often.  According to her 70 year old aunt, Herman is the best cake she had ever eaten!

So, about a week later I get home from shopping to find a Royal Mail red card through my door to say that they have left a parcel with my neighbour.  I pop over, a little confused as I knew I hadn't ordered anything and was very excited when I opened up the package to find Herman there in a jar.  I immediately emptied him into a bowl, gave him a stir and covered him with a tea towel.  The instructions then took pride of place on the fridge door.

Every day I attended to Hermie as I had now affectionately called him and on days 4 and 9 I had to feed him with a cup of sugar, flour and milk.  On day 9 I was to separate him into four portions, give three away and number four is kept to bake the next day.  I managed to find two willing people to take on the Hermie babies and kept the third to start the process over again.

On day 10 I added the last lot of ingredients ready to bake.  I am not a fan of cooked apple, so instead I got a bag of 'luxury' mixed fruit and some glacier cherries.  Using my 13x9" tin, I baked him up.  When he came out of the oven, I left him to cool a little before turning him out onto a cooling rack.  This was where I realised I had  been a little foolish in not using baking parchment to line my tin!  Yep, you guessed it, the cake got stuck to the tin.  I managed to get the cake out in mostly one piece and when cool, I put it back in the tin to slice up (I was afraid if I tried to move it to a plate it would fall apart! lol).

I must say, I was impressed.  Hermie does indeed taste scrumptious and I would recommend it to anyone!  My second batch I baked in a round tin and this one also tastes good.  This time I swapped the glacier cherries for walnuts, which does make it a little bit drier, but it is still nice.  I had three volunteers for Hermie #2, so I now have to wait and hope that I get another batch passed onto me again.  I would love to play around a bit with the fruits and spices in the cake. 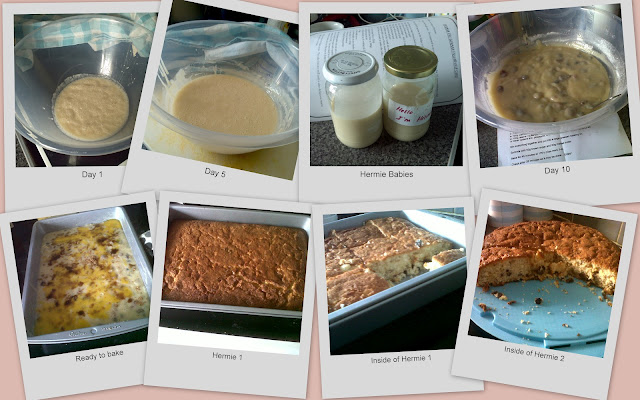